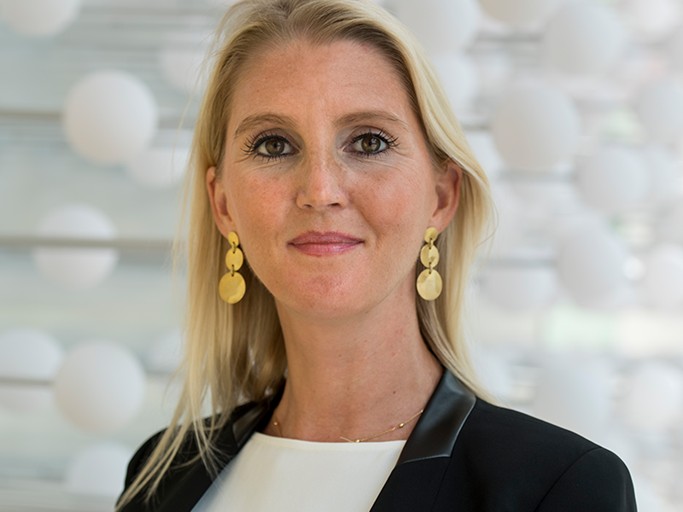 Corporate Director Marie-Pauline Lauret (38) believes that her outspoken personality has brought her to where she is today. This finalist of the Young Captain Award 2016 remains true to her own values, even when things are not going her way. “You must have the courage to have honest conversations with yourself.”

Marie-Pauline Lauret is colourful, definitely no shrinking violet. She does not stick to the beaten track and is not afraid to challenge injustices. Three years ago as chair of the working group on the future of the audit profession in the Netherlands she presented 53 measures aimed at restoring trust in the audit profession in the Netherlands. At her current employer AkzoNobel she has been equally bold in stating what’s what. She is a relatively young corporate director of internal audit at the dynamic paints and chemicals group, where she and her team seek to make a difference by performing around 100 internal audits each year. Lauret is a firm believer in authenticity and clarity, and believes that these qualities also help further your career. “Being outspoken got me noticed and marked out as a talent.” She also believes in looking beyond your own circle. In her view there is always a danger of developing tunnel vision, in terms of either your job or your department. And so she talks to as many people as possible. “I always want to connect different people. I do it all the time at AkzoNobel.”

“Pursuing a career in the traditional sense has never been an end in itself. I don’t necessarily want to manage an ever-growing number of people. What I want is to excel and provide added value. I’ve never been afraid of being different. For example, I was a different kind of auditor. I went beyond just doing my job to the best of my ability; I asked clients persistent questions and was always extremely inquisitive, which allowed me to serve them even better. I was also concerned with improving the audit profession and how we could help make the world more sustainable. What drives me is what I can add. I want to make an impact.”

“I also want to add something at AkzoNobel. With my audit department I contribute towards the ongoing improvement of the company. We don’t just produce factual reports on our findings; we also look for the root causes. Why do people behave in a certain way? What are the underlying standards and values? We make recommendations on that.”

“I am Dutch but grew up in France. After obtaining a French degree in international business administration I wanted to qualify as a Certified Public Accountant (CPA). I had to pay for the study myself. The solution was to be a working student, which was something that was possible in the Netherlands. So that’s what I did. A dive in at the deep end. Because at that point I was not sufficiently skilled in Dutch language and had to make up 12 course deficiencies. And I had to persuade the audit firm KPMG, which had turned me down, to take me on after all. That worked out alright in the end. I completed my course as well as having two children during that period. I have always continued to work hard; working less has never been an option for me because I love my work and get great satisfaction out of it.

“Juggling work, studies and a family might not always have been easy but it has been a source of great inspiration and new insights. I also had an awful lot to deal with when I was chair of the working group on the future of the audit profession in the Netherlands. But I’ve never been one to steer clear of a storm. I don’t really find it tough. I feel protected by my authenticity. I stay true to my values and never doubt them. That is the key to long-term success. I’m also good at self-reflection. When things don’t go my way I am able to have honest, critical conversations with myself. I don’t want to change my environment, but I do look at what I myself could do differently or better.”

“I believe you learn most from people who do other things. Which means you have to venture out of your comfort zone on a regular basis and engage with people you don’t know. I am inspired by authentic people, for example I enjoy talking to artists. I’m intrigued by what motivates them and by the creative process behind an artwork. I also find an outlet for this interest in the supervisory roles I perform at two cultural organisations.

“Art in itself is often also an inspiration. Like the sparrows by Gerard Prent that hang on my wall. They are as free as a bird, strong and fragile at the same time. And they are not afraid to be alone in their differentness. I recognise myself in that.”

“My will is not so much focused on achieving a particular position. Achieving a goal is great, but happiness lies in everyday life. I am much more focused on pursuing what the French call ‘satisfaction personelle’. I want to make the most of each and every day. I can’t leave something lying about or make a hasty job of it. I want to laugh, have fun and stay focused by taking on new challenges all the time. Every day I try to make a little impact.”

ING has been a partner of the Young Captain Award for many years. The initiative is aimed at encouraging young leaders (under 40) with the potential to take responsibilities at the highest level of business and giving them a helping hand on their way to the top. In other words: the leaders of tomorrow! Marie Pauline was a Young Captain finalist in 2016.